There were several members of the press actively covering TEA's Weekend of Events. We will provide links to coverage here as we learn about it. If you have a link to share, please send to rubin. judith AT gmail.com and she will post it here.


Podcasting from The Season Pass Podcast
(TSSP interviewed all the Thea awardees and Summit presenters and many members of TEA leadership during the weekend, and those interviews will be coming online in the near future)
NewsParcs
Profile of Europa-Park, which received the Thea Classic Award
EntertainmentDesigner
Review of Thea Awards Gala by Sasha Bailyn

Tweeting from TEA Summit or Thea Awards Gala? Use these hashtags

Hashtags to use for Tweets relevant to the TEA Summit or the Thea Awards Gala:

Thank you to everyone helping make TEA's 2013 Weekend of Events a success! 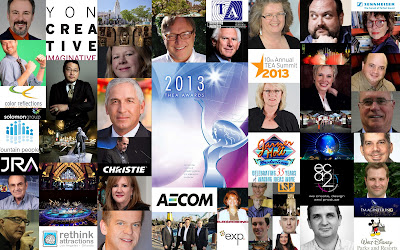 TEA's Weekend of Events: Come. Be inspired - Join the conversation and celebration.

Welcome to the online information hub of the 2013 TEA Summit and Thea Awards Gala, which will take place 4-6 April 2013 at the Disneyland Hotel, Disneyland Resort, Anaheim California, USA. This Weekend of Events kicks off TEA's 2013 Signature Events Calendar. All pertinent information about schedule, program, speakers, awardees, sponsors and registration will appear here.

Register and buy tickets at the TEA Box Office.

Established 19 years ago, the industry’s annual Thea Awards bring the themed entertainment community together to recognize and celebrate outstanding achievements. The Thea Classic Award recognizes the longevity of classic attractions such as the first awardee, Disney’s Pirates of the Caribbean and the 2012 awardee Puy du Fou Park in France.

The Buzz Price Thea Award for a Lifetime of Distinguished Achievements annually recognizes an industry icon who has championed the globally infectious passion and dedication in our industry. From the first lifetime recognition given to Buzz Price in 1994, to Marty Sklar, Kim Irvine (the first woman recipient), Bob Rogers, Bob Ward, Mark Fuller, (etc.) to 2013’s Frank Stanek, the Buzz Price Thea Award honors the extraordinary accomplishments of these daring creative visionaries.

Traditionally attended by 500+ decision makers from around the globe, the awards gala begins with an extraordinary networking reception. Dinner in the Disneyland Hotel Grand Ballroom precedes the presentation of the Awards for Outstanding Achievement along with recognition of the Buzz Price Thea Award and the Classic Award. Continuing the celebration, dessert and coffee are served immediately following the awards presentations in the foyer outside of the ballroom allowing for additional time to network and congratulate recipients.

Master Class for executives,
April 4
A limited-seating, master’s session for executives from our global member companies. Discussions include valuable strategies for successful ideation, execution, production and financial management. The Master Class sessions are intimate, informative, and specifically focused on doing business within our industry. This year’s Master Class keynote speaker is Matthew Ouimet,President and CEO of Cedar Fair.

Case Studies Day brings together this year’s international Thea Award recipients to share the insights and issues critical to the success of their projects. Attendees receive an in-depth look into the projects receiving Thea Awards for Outstanding Achievement. Traditionally attended by 140 or more, this is a day of learning, information exchange, networking and sharing of ideas and solutions. With many students joining experienced industry professionals, Thea Case Studies Day is also a key opportunity to welcome, educate and introduce the next generation of thought leaders and creative talent. Keynote speaker for Case Studies Day is Frank Stanek of Stanek Global Advisors.

NextGen Activities
NextGen activities at the Summit/Thea’s Weekend of Events will include a “Breakfast of TEA Champions” on Saturday morning April 6th. Industry veterans will be addressing TEA NextGen members in an intimate setting allowing for individual career path discussions and Q & A.

Through its NextGen Initiative TEA has an ongoing and multifaceted outreach program supporting and encouraging the next generation of industry leaders. It has implemented educational outreach programs with schools such as UCLA, Carnegie Mellon and Savannah College of Art and Design in order to pass along the wisdom and experience of industry veterans. TEA NextGen members represent more than 70 schools around the world. Students and young professionals from around the world are awarded scholarships to participate in the TEA’s exceptional educational and networking conferences that often prove to be life-changing.

TEA’s signature events are a vital part of the purpose of the association. They provide networking, education and, dare we use the word, compelling experiences! April 4-6 kicks off the TEA’s 2013 calendar of international events with the two-day Summit conference and the Thea Awards Gala presented by AECOM, and new this year, expanded NextGen activities.

These are unique and important gatherings, bringing together our entire industry from top decision makers to the Next Generation of creative talent. Every 2012 Signature Event last year enjoyed record-setting attendance. We anticipate participation and attendance in 2013 to continue to grow. From the two day TEA Summit conference through the closing reception of the Thea Awards Gala, TEA’s Weekend of Events should not be missed.

Register and buy tickets at the TEA Box Office.

The Themed Entertainment Association's (TEA) 2013 Weekend of Events, April 4-6 at Disneyland Resort, Anaheim USA, is made up of the TEA Summit business conference (April 4-5), and the Thea Awards Gala (April 6). The TEA Weekend of Events is one of the foremost gatherings of the attractions industry. Day One (April 4) of the 2-day Summit is a limited-seating Executive Master Class, keynoted by Cedar Fair CEO Matt Ouimet. Day Two (April 5), open to a larger and wider audience including students, is Thea Case Studies Day, showcasing the people and projects that will be honored the following night at the Thea Awards Gala (April 6) - a lavish, ticketed, black tie dinner event celebrating excellence in the Experience Industry. Register and buy tickets at the TEA Box Office.

The United States Navy, Dick Clark American Bandstand Restaurants, and Driscoll Berries. Back working with Edwards Technologies, Inc. (ETI) as Vice-President of Business Development to launch Cloud based Media Management Systems into the Retail, Shopping Centers, Museum, Zoo & Aquarium, Visitor Centers and Theme Park markets.
Ms. Perry was a founding member of the Themed Entertainment Association and served as the association’s president for two years. She is the past chairman of the International Nightclub and Bar Association, past board of director’s member for the National Restaurant Association Marketing Executives Group, past member of the NFL Sunday Ticket Advisory Board and the City of Seattle Fair Campaign Practices and Ethics Committee. Currently serves as on the Board of Directors for The Earth Organization and on the Board of Directors for Toastmasters International.

The Themed Entertainment Association's (TEA) 2013 Weekend of Events, April 4-6 at Disneyland Resort, Anaheim USA, is made up of the TEA Summit business conference (April 4-5), and the Thea Awards Gala (April 6). The TEA Weekend of Events is one of the foremost gatherings of the attractions industry. Day One (April 4) of the 2-day Summit is a limited-seating Executive Master Class, keynoted by Cedar Fair CEO Matt Ouimet. Day Two (April 5), open to a larger and wider audience including students, is Thea Case Studies Day, showcasing the people and projects that will be honored the following night at the Thea Awards Gala (April 6) - a lavish, ticketed, black tie dinner event celebrating excellence in the Experience Industry. Register and buy tickets at the TEA Box Office.


Presiding over the TEA Weekend of Events is TEA president Christine Kerr of BaAM Productions. The International Board of the TEA unanimously elected Kerr to step into the presidency in November 2012.

Christine Kerr is Vice President of BaAM Productions, a Toronto-based design, project management and event management company that creates projects ranging from cultural exhibitions to major league sports extravaganzas. Her career has included many years leading theme park entertainment and operations teams in Europe, the US and Canada. She has been active within TEA since 2002; first as a member of the Eastern Division Board of Directors, and then serving as its President for 3 years.

Kerr was elected to the TEA International Board of Directors in 2008 and has served as a Vice President for the past 4 years. In addition to her leadership role in the attractions industry, she is an active volunteer and leader in her community including a term as a member of her local Cultural Advisory Committee, and 6 years as a member of the Board of Directors for the Royal Botanical Gardens, including 2 years as Vice Chair.

Primary on Kerr's agenda for TEA are a leadership search to find a successor to executive director Gene Jeffers who will retire in 2013 after more than a decade of service; growing the association's NextGen outreach and mentoring initiative for students and recent grads entering the attractions industry; and helping position TEA to serve an increasingly global industry, especially the rapidly growing Asian sector.

Kerr says, “The opportunities for our members to share their knowledge and learn from each other grows every year as the lines that once defined our industry continue to expand, and the composition of our membership likewise becomes more diverse.” 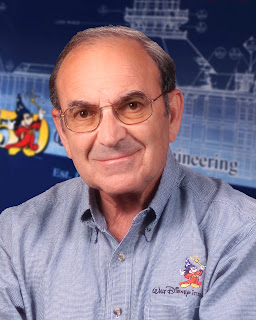 The TEA Summit & Thea Awards are created by the Themed Entertainment Association.

The TEA Summit is a 2-day business conference held at Disneyland Resort in Anaheim, Calif. on April 4-5, 2013.

The Thea Awards Gala is at the Disneyland Resort, Anaheim, Calif., April 6, 2013. Click to see list of award recipients.

Advertise in the 2013 Thea Awards Program